If a play makes you feel grief with every fibre of your being, and touches the most vulnerable, hidden part of yourself, it means it’s a damn good piece of theatre. Especially if the said play is written and performed entirely in Norwegian (with surtitles).

Ibsen’s 1894 play Little Eyolf comes to The Print Room straight from the National Theatre of Norway, and does so with a bang. The half magic, half tragic story of  Eyolf, the pitiful child of Alfred and Rita, could not be more relevant today. Eyolf remains disabled after an accident occurred while his parents are too busy making love. After a six-week retreat in the solitude of the mountains, his father Alfred decides that he will dedicate his whole life to give Eyolf the happiness he deserves (to make amends, if you wish). This hope is curtailed as the Rat-Wife appears, and with her luring powers entices Eyolf to go with her, never to come back.

Pub fact: Ibsen is the second most performed playwright after Shakespeare. While hugely popular, his plays are notoriously dark, mysterious, and all too easy to over-sentimentalise. The huge merit of this production is that none of the above applies. The show is yes, full of sorrow and distress, but the emotions are presented with clarity, in a simple, direct, utterly relatable way. Deep questions such as guilt, affection, the role of parents, and family dynamics are conveyed lucidly. It’s hugely refreshing and inspiring to see theatre this good still exists. 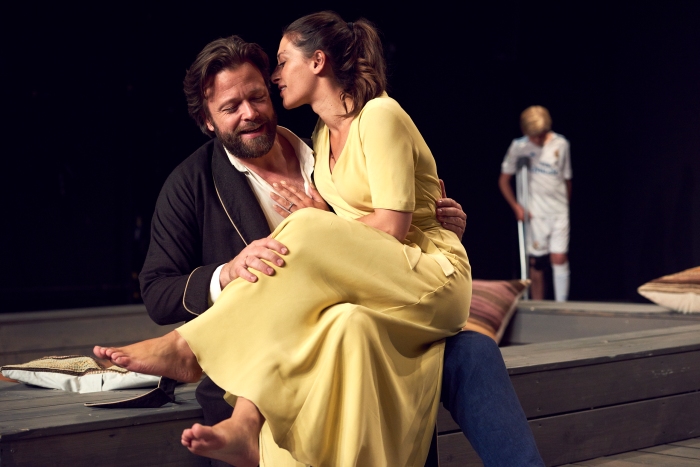 The cast plays a crucial role in making the production a success. They are just wonderful. Intense, visceral, sharp are the performances of Alfred (Kåre Conradi) and, especially, Rita (Pia Tjelta), whose acting is among the most heart-felt and credible I’d seen in a while.

A bold (perhaps excessively so?) lightning design makes the cast acting virtually in day light for most of the show, which is at times a bit distracting. But this is counter-balanced by a brilliantly lyrical moment with rain and smoke, delivered by the stage operators with the composure and solemnity you might expect from the most skilled actors. Everything in that scene, as in the majority of the play, was pure, honest and just hit the mark.