Intense. At the end of the show, my friend and I agreed this was the word that best described the new Royal Academy exhibition featuring the work of Michelangelo and Bill Viola. I was expecting a lot of Michelangelo (possibly more than what’s on display) and a bunch of videos by Viola. The show is in fact an attempted conversation between Viola and Michelangelo – sometimes they have nothing to say to each other, sometimes they get lost in their own verbosity, and only occasionally they spark off interesting ideas.

Bill Viola is a pioneer in video art and among his artistic interests Wikipedia mentions life, emotion, consciousness, and dreams. As he explained in an interview with Laura Barnett, at the age of six he fell into a lake and saw “the most beautiful world he’d ever seen in his life”. All of his art is an attempt to recreate that world of lost beauty. In all honesty, that water is a constant preoccupation of Viola is fairly obvious from the exhibition itself – lakes, ponds, oceans, people submerged and surrounded by pebbles, diving, swimming, floating, and disappearing into abyssal depths are omnipresent. This, on the surface, has very little to do with Michelangelo’s majestic, solid, earthly and telluric figures.

One merit of Viola’s videos is a constant element of surprise. Some of them are unexpected to the point of being disturbing – I almost fainted while watching the Nantes Triptych (1992), where you see a woman giving birth (with no sugar-coating of sort), together with Viola’s mother on her death-bed and (surprise surprise) a man floating in water. In other videos, the surprise is milder and more pleasant. In The Reflecting Pool (1977-79), you spend most of the video wondering what’s the whole point, until something happens that turns your expectations upside down.

Other works, while not necessarily ground-breaking in meaning, have undoubtedly a compelling aesthetics. This was certainly true of Slowly Turning Narrative (1992), where a central panel spins round in the middle of a room, flashing the audience now with a video on loop, now with a mirror, with beaming lights to complement the whole. Similarly, Five Angels for the Millennium (2001), five huge videos of people in water in ridiculously slow motion, works mostly on the surface, with its semantics and significance hard to decipher.

Michelangelo’s drawings, on the other hand, sublime and breath-taking as they usually are, are here limited in number, and often struggle to create a worthy conversation with Viola. Why are two Crucifixions flanking Surrender (2001), where two people are experiencing some strong, blurry emotion, before melting into pure colour? What’s the significance of juxtaposing it to the utterly lonely and colourless experience of Christ on the cross? The contrast felt much too stark for me.

Likewise, the Taddei Tondo, exhibited in the same room as the Nantes Triptych, doesn’t seem to speak of humanity in the same way as the installation does. The relief, with its tender Madonna and baby Jesus and John the Baptist, is delicate and soft; it’s a whispering non-finito. Its approach to life and death is antipodal to Viola’s triptych; while it does make you realise that Jesus was a real baby and Mary an actual mother, the similarity seem to end there.

One word should be spent also on the words accompanying the show. Curators Martin Clayton, Kira Perov, and Andrea Tarsia, have decided to include a handful of Michelangelo’s sonnets on the exhibition panels. Now, Michelangelo’s poetry is notoriously pretty bad, most of the time unspeakably banal, and more often than not stating the obvious in rather plain language. Reading poems such as “Whoever is born arrives at death” (Poem 21) alongside his works ends up being off-putting, and rather than adding anything, it takes away the already precarious beauty of the show. In addition, a few of the poems chosen deal with the artist’s repudiation of his own art, which just feels out of place here. Even his preoccupation with death, while admittedly related to the subject matter of the exhibition, is expressed in such clumsy terms that doesn’t enrich it in any way.

By contrast, the excerpts from Viola’s writings are a bit more insightful (though at times pretty dense and convoluted). “Duration is to consciousness as light is to the eye” is the one that stayed with me, especially seen in tandem with The Dreamers (2015), where seven people are filmed underwater, hardly moving (hardly breathing even). This prompted questions such as “Who are we when we dream?” and “What is our consciousness made of?”, which felt inspiring and refreshing.

By far the most enriching Michelangelo / Viola combination is at the very end. We come from seeing a trio of glorious resurrections of Christ – glorious in their execution, not in what the wall panel calls “the radiant light” of Christ’s torso, “with a glory that transcends materiality”. The final room exhibits Tristan’s Ascension (The Sound of a Mountain Under a Waterfall) (2005). In the video, Tristan is slowly lifted up on high, in a reverse watershed of water (of course). We don’t know where he comes from, nor where he is going (in fact, we could be blissfully ignoring that he’s Tristan at all), but the work is poignant and beautiful, and takes us places. It has a slow, intense, beautifully elongated quality to it. It demands to be watched from beginning to end, like all great art. I wish the whole exhibition was so uplifting and other-worldly. 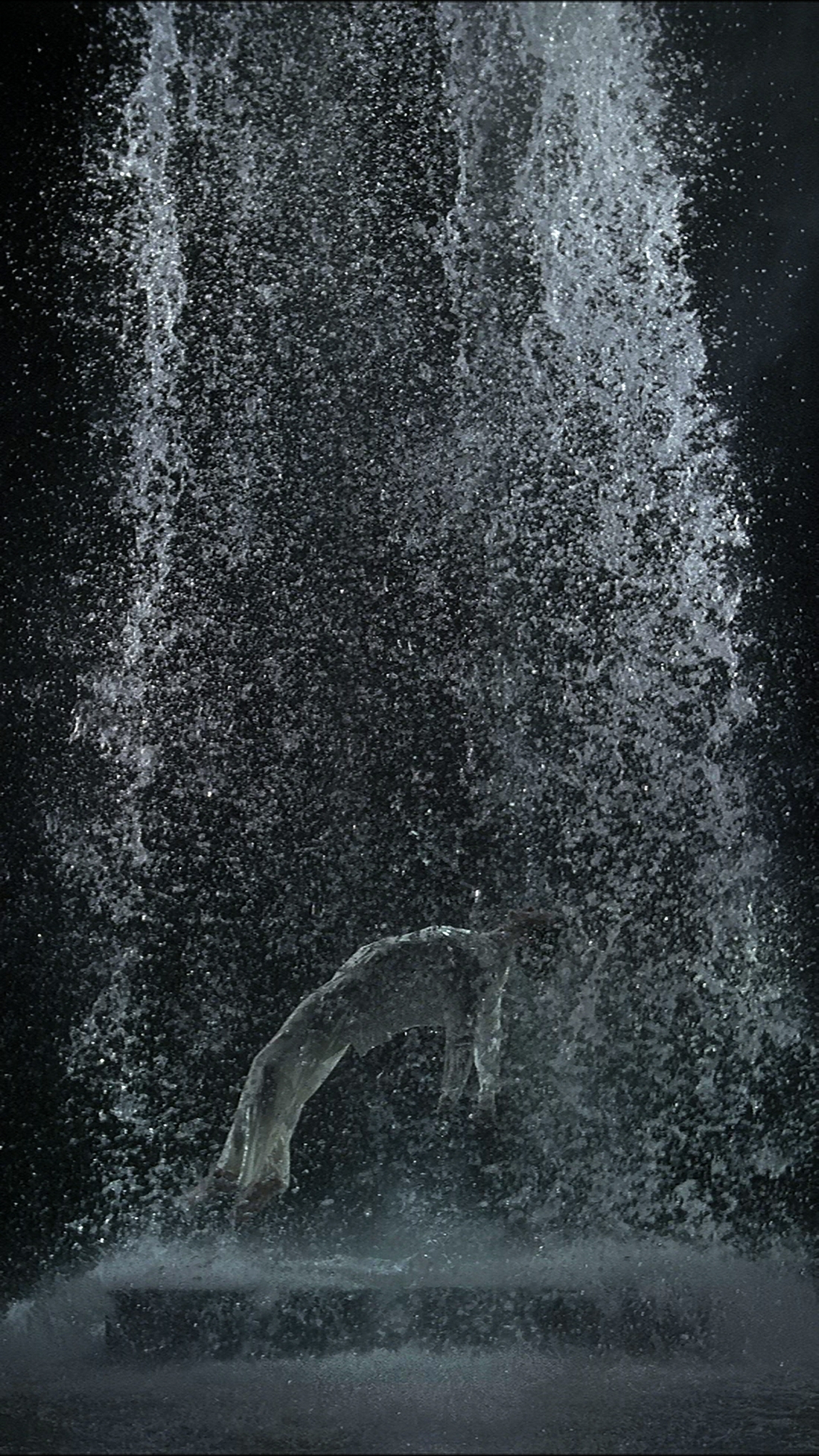 Bill Viola, ‘Tristan’s Ascension’ (The Sound of a Mountain Under a Waterfall) (2005) © Bill Viola